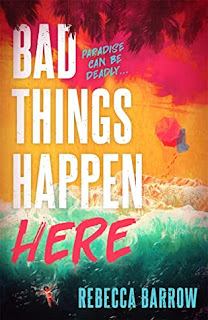 The island of Parris: paradise or poison?

Luca Laine Thomas lives in Parris, the beautiful island plagued by the unsolved deaths of young women - most significantly, Luca's best friend. All Luca wants is to heal from the traumatic loss and leave her feelings of guilt and helplessness behind.

Then Luca comes home to find the police at her house. Her sister, Whitney, is dead.

Luca and Naomi, the new girl next door, decide to take the investigation into their own hands, and along the way their connection deepens. Soon, their casual touches and innocent flirtations become something way more real. But finding out what happened on the night of Whitney's disappearance reveals lie upon lie.

Nothing is as it seems. Will Luca's search finally reveal truth about her sister's murder? And will she unravel and escape the clutches of the curse and survive Parris?

I didn't really dislike this book, but I wasn't into it. It fell very flat for me. I liked the relationship between Naomi and Luca in the first half and I was shocked when certain things were revealed. But everything else I just wasn't feeling.
The main character annoyed me a lot at one point in the book. I felt she believed that a particular person had done it too quickly, even though there were reasons why I thought she should be less likely to believe it. It really put me off the character. I get the author's reasons for doing it and maybe it's realistic to life, but it annoyed me.
I don't have anything more to say really. There was nothing bad about this book, I just wasn't into it.

My thanks go to Netgalley and Hot Key Books for providing me with this copy for review.