Half a Soul by Olivia Atwater 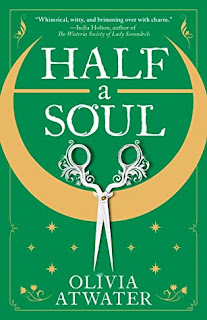 It's difficult to find a husband in Regency England when you're a young lady with only half a soul.

Ever since she was cursed by a faerie, Theodora Ettings has had no sense of fear or embarrassment - a condition which makes her prone to accidental scandal. Dora hopes to be a quiet, sensible wallflower during the London Season - but when the strange, handsome and utterly uncouth Lord Sorcier discovers her condition, she is instead drawn into dangerous and peculiar faerie affairs.

If Dora's reputation can survive both her curse and her sudden connection with the least-liked man in all of high society, then she may yet reclaim her normal place in the world. . . but the longer Dora spends with Elias Wilder, the more she begins to suspect that one may indeed fall in love, even with only half a soul.

What I have to say

Two regency books in the last few months! What's going on with that! But Half a Soul is regency with a difference. It's a faerie tale that just happens to be set in regency England!

I really enjoyed it. Though I can't say it was an accurate reflection of the time period, or that regency fans would like it, I feel like fans of the fae and fairytales would really like it.

Though Dora has only half a soul and therefore doesn't feel emotions in the same way as everyone else, this book doesn't lack in emotion. She feels what she calls "long tailed emotions" like hurt and passion and slow burning anger.

What I loved most about her was her passionate anger when faced with the injustices of the workhouse and the world. I also felt that there are parallels between her and some neurodiversities!  I don't know if it was intentional, but some of the bluntness in the way Dora spoke and the way she saw the world around her felt really familiar to me and I couldn't help comparing it to my autism. In many ways this felt like a disability story as well.

So read for: dark irredeemable faeries, swoon-worthy magicians and a sizable helping of magic!

My thanks go to Little Brown Books and Netgalley for providing me with this copy for review.