It's UKYA DAY: Here's why I love UKYA. 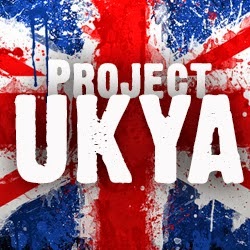 I don't even know how to begin listing reasons why UK does the best YA. There are so many reasons and so many amazing books that it's hard to pick just a few, especially in any order, but here we go. I like UKYA because...:

- It's familiar. Authors are writing about the country I live in, the country I've grown up in. It's nice to have the comfort of familiar places in the reading, even in Urban Fantasy or Dystopia. I can picture the settings so much easier because they're so much a part of my life. Especially if they're somewhere I've been.

- Talent. I don't think I need more than one word for this. There are some great authors out there. I'm not saying that only British writers are good. But in my experience, there is less crap or trash written by UK authors. Our publishers seem to hold a higher standard of quality. Probably because we have less.

- Intricate stories. If anyone has not yet read the Slated Trilogy, read it now. It is amazing, filled with so much mystery and secrets and intrigue. The character and her backstory is so complicated with so many levels too it AND it all makes sense. Code Name Verity is another book that blows you away with the layers of it.

-Friendly authors. I love talking to authors on twitter. It's fun and they're all really nice. But a lot of authors are just too big to be able to have long conversations with fans. But UK authors are a smaller group. They're all very social and most don't have the massive amount of fame that comes to a lot of the Americans, even though they've got the talent. This means that they can have long conversations and really get to know their fans.


All in all, UKYA is awesome. And it's a huge shame that a lot of books from the UK don't get the same recognition as a lot of American books.

That's where Project UKYA comes in! You can find out more at the Project UKYA twitter or blog and join in with chats, contests, live shows and readathons.
Posted by TheWhisperingofthePages at 14:03

Email ThisBlogThis!Share to TwitterShare to FacebookShare to Pinterest
Labels: UKYA, YA