The Bone Sparrow by Zana Fraillon 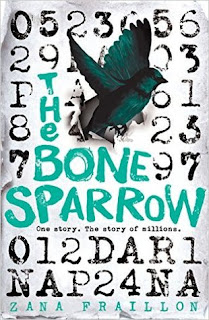 Subhi is a refugee. Born in an Australian permanent detention center after his mother and sister fled the violence of a distant homeland, Subhi has only ever known life behind the fences. But his world is far bigger than that—every night, the magical Night Sea from his mother's stories brings him gifts, the faraway whales sing to him, and the birds tell their stories. And as he grows, his imagination threatens to burst beyond the limits of his containment.
The most vivid story of all, however, is the one that arrives one night in the form of Jimmie—a scruffy, impatient girl who appears on the other side of the wire fence and brings with her a notebook written by the mother she lost. Unable to read it herself, she relies on Subhi to unravel her family's love songs and tragedies.
Subhi and Jimmie might both find comfort—and maybe even freedom—as their tales unfold. But not until each has been braver than ever before.

This was a beautiful magic story set against the backdrop of one of the worst places a human can exist. The magical feeling of the Night Sea and the Shakespeare duck are a massive contrast to the grim and horrific reality of the center. Subhi is the perfect person to tell this story because his optimism and imagination soften the tone and make it so that it doesn't get too depressing.

I loved Jimmy as well. Having the two views, one from inside the camp and one from outside the camp really contrasts the differences, even though Jimmy's life isn't that great, it highlights the fact that even someone living in a trailer with very little in her life, she is still better off than those in the camp.

This is definitely an eye opening book, but it is also a really fun and enjoyable read.

My thanks go to Orion and Netgalley for providing me with this copy for review.
Posted by TheWhisperingofthePages at 14:55

Email ThisBlogThis!Share to TwitterShare to FacebookShare to Pinterest
Labels: 4 stars, Australian YA, awareness, diversity, refugee, YA