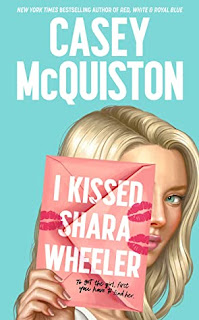 But a month before graduation, Shara kisses Chloe and vanishes.

On a furious hunt for answers, Chloe discovers she's not the only one Shara kissed. There's also Smith, Shara's longtime quarterback sweetheart, and Rory, Shara's bad boy neighbour with a crush. The three have nothing in common except Shara and the annoyingly cryptic notes she left behind, but together they must untangle Shara's trail of clues and find her. It'll be worth it, if Chloe can drag Shara back before graduation to beat her fair-and-square.

Thrown into an unlikely alliance, chasing a ghost through parties, break-ins, puzzles, and secrets revealed on monogrammed stationery, Chloe starts to suspect there might be more to this small town than she thought. And maybe - probably not, but maybe - more to Shara, too.

This is how you do enemies to lovers. It was clear from the start that Chloe's hatred of Shara Wheeler was based completely on the crush she had on her, which was so painfully obvious to absolutely everyone but Chloe herself. It was perfect, the way that the grudge was built up so beautifully that it led the reader to love Shara a little bit as well.
On top of that, this book was so queer. I don't think a single one of the main characters was actually straight. It had representation for bi, lesbian, gay, non-binary and gender questioning characters and that's just what I remember off the top of my head. If you had any question that this book was gay (which how can you really considering the plot), let me assure you, this book was very, very gay.
If I absolutely had to give a negative about the book, then maybe the mystery was all resolved a bit too quickly as the last half of the book is more about Shara and Chloe's relationship, but even then, I would have hated the book to end on finding Shara and the games between Shara and Chloe are just beautiful.
All in all, this book was just perfect. A must read for anyone who loves the enemies to lovers trope.

My thanks go to Netgalley and Pan Macmillan for providing me this copy for review.
Posted by TheWhisperingofthePages at 19:01

Email ThisBlogThis!Share to TwitterShare to FacebookShare to Pinterest
Labels: American YA, bible belt, contemporary, enemies to lovers, LGBT, YA