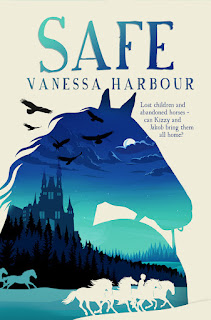 In the chaotic last days of World War II, Jacob and Kizzy are tricked into a life or death journey.

Heinz, their guardian, thinks they are simply helping to fetch some rare horses, but they are really being used to get over the border. Far from home, they are attacked and only just escape. They hide in a seemingly deserted mansion, but they keep hearing strange noises…

Investigating, they find it shelters not only forty abandoned horses but a small band of lost children, displaced by the war. With danger on every side, can Kizzy and Jakob keep them safe and get them all home?

I didn't realise this was a sequel and had to go and read the first book in the series first and I'm glad I did because there were so many references to different things that happened in Flight. I did however like it a whole lot better than Flight. There was more story to it and therefore it felt less predictable. I also felt like there was more danger in this book, the danger felt more abstract in Flight. It felt more like they were alone, whereas in Safe there was the constant reminder that they were right by the roads the Nazis were travelling along.
There was also less animal death in this one. There's a bit of hunting and fishing, but that's it, unlike Flight.
I really enjoyed getting to know the children's and their different stories and background. It was nice to see a physically disabled character and a character with mutism added to the cast, especially as with the background of war and illnesses like polio, both these things would have been fairly common at the time. I thought they were handled fairly well but having neither of these things myself, I can't be sure. I also can't be sure of the handling of the Romani character, who was the POV character for this book though I questioned whether her identity was being stripped away since she no longer rode the horses bareback in this book.
Overall I really enjoyed this book, which was a surprise since I wasn't into Flight.

(4 stars)
My thanks go to Netgalley and Firefly Press for providing me with this copy for review.
Posted by TheWhisperingofthePages at 19:13